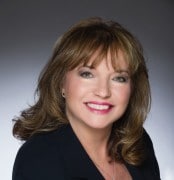 Greater Media announced Mary Menna has been named as the General Manager of Greater Media’s WMJX-FM Magic 106.7 in Boston. She will begin the newly created position on 5/27.

The legendary Boston radio vet most recently served as the Market President of Clear Channel Media + Entertainment – Boston, where she spent 25 years serving in a variety of capacities, including Director of Sales, General Sales Manager, National Sales Manager and Account Executive. While in that capacity, she also managed Clear Channel’s Providence market for four years.

In the newly created position, Menna will be responsible for overseeing the management and sales responsibilities of WMJX-FM. She will report directly to Greater Media Boston Vice President and Market Manager Rob Williams.

“Mary Menna is unquestionably among the best managers in Boston media and has built an enviable track record of success and respect among her team, her peers, and her clients,” said Rob Williams, vice president and market manager of Greater Media Boston. “In the newly created position of General Manager of our flagship brand, MAGIC 106.7, Mary will work closely with me, our Director of Programming Cadillac Jack and Director of Sales Mark Keaney to help our cluster continue to grow and reach its full potential.”

“I am absolutely thrilled to be starting a new chapter of my career in the newly created position of General Manager of the legendary MAGIC 106.7 in Boston,” said Menna. “I am excited to be reunited with many of my former colleagues and to be working with Rob Williams, Cadillac Jack and the entire talented Magic team.”

Menna began her radio career straight out of Boston College at WBCN-FM.  She went on to work at WBZ-AM, WBOS-FM, Kiss 108 and WJMN.