Can radio or television stations take a cue from their advertisers by engaging in a viral campaign that responds instantly to a particular event of the moment? Check out the following guest column from Jim “Wegs” Wegerbauer, Chief Idea Officer at Dallas-based advertising agency Dieste Inc. Wegs believes there’s a new marketing tool in the spotlight — and it involves “newsjacking.” Discover how this can be applied to a big entertainment announcement or local event your station can make its own.

According to the Digital Marketing Glossary, newsjacking may be defined as “the art of using news events or stories for marketing and advertising purposes.”

The idea is to identify breaking stories and find a creative way to become a part of them.

A term popularized by David Meerman Scott, newsjacking first came to prominence during the 2013 Super Bowl, when an unprecedented 34-minute power outage at the Louisiana Superdome delayed the big game.

While most brands were left as flat-footed as the players waiting for the game to resume, Oreo tweeted out a hazily lit cookie with the following copy: “Power Out? No Problem. You Can Still Dunk in the Dark.”

Some 15,580 retweets and over 20,000 Facebook likes later, both the Oreo brand and a new marketing tool were in the spotlight. Soon, it seemed that every brand was looking for ways to cleverly crash the cultural conversation.

Duracell. After Hurricane Sandy, the battery-maker—and Dieste client—promptly sent mobile charging stations to those in need. This effort played naturally into their mission of empowering people, and the social media it generated from both the brand and earned sources only amplified it all.

Nike. While not an official sponsor, Nike managed to newsjack the World Cup with their viral video, Risk Everything.

Excedrin. In the most recent ploy for media domination, Excedrin came out on top with their #DebateHeadache tweets during the last Presidential debate. The execution was simple: clever, concise copywriting with simple imagery. 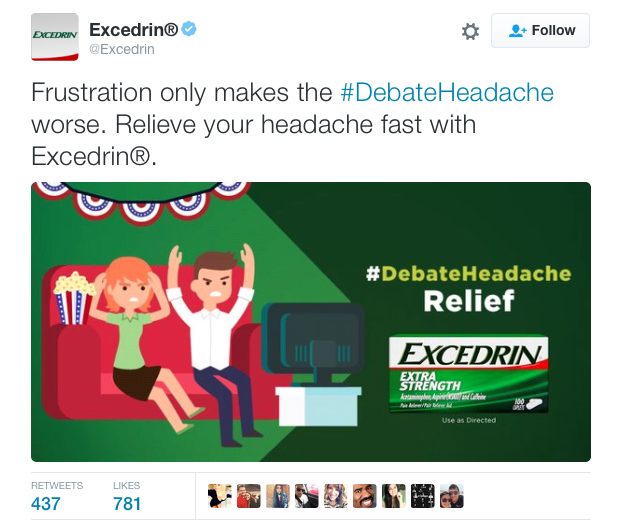 Sears. Like Duracell, Sears addressed those affected by Hurricane Sandy. Unlike Duracell, Sears came off tone deaf by tweeting out what amounted to an ad for themselves. Generators and air mattresses were relevant, but the tone was too commercially self-serving.

The Golf Channel. Someone pulled the wrong club out of the bag and hit one in the water, when they asked viewers’ to connect their “Golf Dreams” with Dr. Martin Luther King, Jr and his inspiring I Have a Dream speech.

Donald Trump. In many ways, Mr. Trump has been a master of manipulating the media this election cycle. However, there have been moments that have cost him. After the tragic Orlando shooting, the candidate seemed to some to be less sad for the victims than satisfied that his predictions of terrorism had come true. Newsjacking requires a lot of empathy.

The Walking Dead. Since its 2010 premiere, brands have been clamoring for a share of the zombie hit’s spotlight. Variations of hashtags for the show trend every Sunday when it airs and the recent premiere of the seventh season was no different. Via promoted tweets, various brands tried to jump in on #TheWalkingDead with different approaches and results.

Play By The Rules

1.) Be Relevant: Your brand and message should fit naturally and tastefully into the storyline.

2.) Be Timely: Too early or too late to the story, and you’ll not be noticed.

3.) Think Critically: Real-time decisions can lead to real big problems. Think clearly, and make sure that your team doesn’t fall into groupthink.

Connected Video Devices To Top 1.1B Installed Through 2026