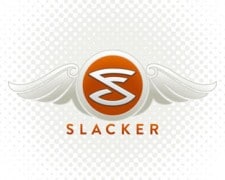 Pandora’s popularity comes from its Genome Music Project, where you pick an artist (or more than one) and Pandora’s music discovery software chooses songs based on that. It also has pre-programmed music channels you can adjust along the way with likes or dislikes of particular songs. But Slacker says the selection at Pandora is limited. And another difference is Slacker says it employs actual DJs to program the stations rather than software.

There are over 200 “expert curated” stations available right now, which can all be personalized in some way. And Slacker boasts a lot more songs – as well as news and talk radio –  than Pandora and Spotify.  Slacker, available on the web, iOS, Android, Windows and Blackberry, says the upgraded service has:

–The best content: 10 times the music of Pandora plus news, sports and talk from ABC and ESPN.

–Three tiers of service: Stream it for free. Subscribe for on-demand access. Listen from anywhere – online or off. It’s the only complete digital music service.

–Slacker (FREE) – Stream millions of songs and hundreds of expert-programmed stations on any device.  Enter a song, artist or genre and let Slacker entertain you!

–Slacker Plus ($3.99/mo) – Enjoy a commercial-free experience with unlimited song skips.  Customize and download your favorite stations for offline listening.

“Slacker is the most complete music service on earth, with 10 times the music of Pandora, expert-programmed stations Spotify can’t touch, and personalization that satellite services only dream of,” said Jim Cady, CEO, Slacker. “We’ve quietly built a scalable business with more than a half-million paying subscribers and more than four million monthly average users.  2013 will be a blockbuster year for Slacker as we ramp up our marketing efforts and take the service to a broader audience.”

RBR-TVBR observation: Ok, at first we were pretty convinced that traditional radio will always have something that Pandora (or Slacker) didn’t: DJs. Now, Slacker has that, at least in the DJ-programmed stations. But remember, these aren’t live DJs, yet–that would cost a bundle for 200 channels. In addition, so far, most online-only radio as a whole has no localism. Traditional radio and their online streams still have that and that’s still; the best pitch to clients, along with community service and dependability in emergencies.

Also, remember that terrestrial radio’s online stream offerings are also catching up with Pandora, Slacker, Spotify, et al’s song-skipping functionality. Abacast just announced a new service in beta that lets a listener skip a song that’s currently being played. Another song from the station’s playlist will replace it immediately and play in its entirety, seamlessly.