Deloitte predicts that in 2020, at least 1.6 billion people worldwide, representing 450 million households, will get at least some of their TV from an antenna.

That’s the low end of the estimate.

Extrapolations from verified data suggest that number may even be as high as 2 billion. Along with a predicted $32 billion in 2020 revenues from ad-supported video on demand (AVOD), antenna TV is helping the global TV industry keep on growing even in the face of falling TV viewing minutes and, in some markets, increasing numbers of consumers cutting the pay-TV cord, he says.

Who’s paying for all that free TV? Advertisers.

“We predict that global TV-ad revenues will grow by more than $4 billion in 2020, reaching $185 billion in 2021 compared to $181 billion in 2019,” Stewart says. “In terms of magnitude, this market size change is not wildly out of line with general consensus, but the direction we expect it to take is different.”

While some are anticipating TV ad revenues to fall by $4 billion between 2018 and 2021, Deloitte thinks it will grow by about the same amount.

“That’s not a big dollar difference, but up is better than down!” he says.

To the best of Stewart’s knowledge, no one has ever published global data on antenna TV market size.

“Some data for individual countries exists, and regulators have written about the various shifts from analog terrestrial TV broadcasts to digital (an important topic for reallocating spectrum), but there does not appear to be any global study examining how many people view at least some TV using an antenna,” he says.

For context, this extrapolated number is roughly 50 percent more than all of the people paying to watch TV over cable, telco-provided internet protocol TV (IPTV), and direct broadcast satellite in 2020 … combined, Stewart says. 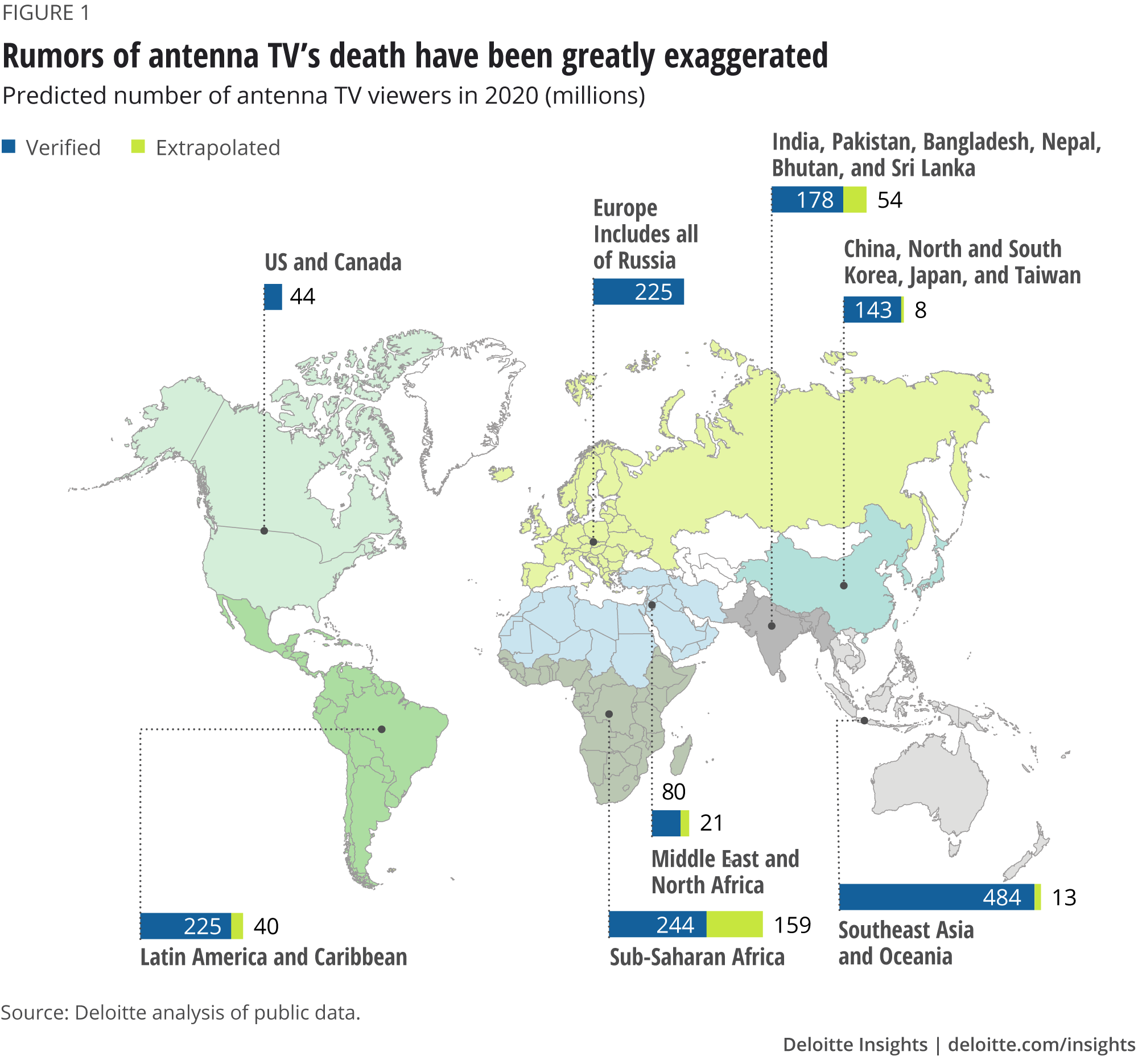 “Antenna TV’s resilience is a bright spot in the overall TV landscape, as the traditional TV industry as a whole (pay TV and antenna TV combined) is facing headwinds,” Stewart continues.

Several signs in the “important” U.S. market point to challenging times ahead.

In the United States, we predict that the number of pay TV subscribers will decline by 5 million in 2020, in line with recent trends.

Further, Deloitte anticipates an average zero percent price increase for what Americans pay for pay TV in 2020—slightly worse than in 2018 and 2019, and much lower than between 2012 to 2016.

Finally, Deloitte expects TV viewing minutes in 2020 to decrease by 5% overall, with double-digit declines among the youngest age groups.

“We base this prediction on the year-over-year decrease among all demographics in 2019; The decline in 2020 will likely be less steep, due to the Summer Olympics and the U.S. presidential election, but it will almost certainly be a decline,” Stewart says.

TEGNA Board Says No To Soo Kim

ViacomCBS: Stuck In The Middle?