The Wisconsin Broadcasters Association Foundation will be saluting four individuals who have actively served the broadcast industry in the state by inducting them into the WBA Hall of Fame.

This year’s class includes a top executive at one of the nation’s biggest broadcast TV companies, an owner of locally focused radio stations, an EAS champion who was an engineer for Journal Communications’ flagship stations, and an innovative training specialist who has influenced hundreds of sales executives across the Midwest. 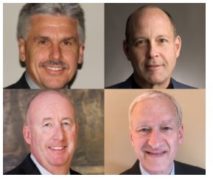 The 2018 inductees are Gray Television EVP/co-COO Bob Smith; Tom Koser, CEO of Koser Radio Group; Instant Sales Training president Chris Lytle, who served as LSM for Midwest Family Broadcasting from 1973-1978 before serving as Advertising Director for American TV and Furniture; and Gary Timm, an engineer at WTMJ-AM, WKTI-FM, and WTMJ-TV in Milwaukee starting in 1973 who spent much of his career working on EAS issues until his 2015 retirement.

The Wisconsin Broadcasters Hall of Fame was created in 1989 to honor broadcasters that have devoted a minimum of 15 years to the broadcasting industry, including a minimum of 10 years as a broadcaster in the state. The award recognizes an individual’s history of exemplary leadership in community and statewide service as a broadcast professional. The Hall of Fame is housed at the Hilton Milwaukee City Center and at www.wisconsinbroadcastingmuseum.org.

With this year’s inductees, the WBA Hall of Fame membership roll grows to 144 members.

The 2018 Class will be inducted in ceremonies on the evening of June 21 at the WBA Summer Conference at the Hilton Milwaukee City Center.

In addition to the four Hall of Fame inductees, the Wisconsin Broadcasters Association is recognizing four Local Broadcast Legends.

They are Kathy Keene, the 37-year host of The Good Neighbor on WHBY-AM in Green Bay; Margaret Neader, a longtime broadcast sales and management professional who has worked at WIZM, WKBH and WLXR in LaCrosse and for Mid-West Family as a receptionist after her “retirement”; Jeff Wagner, GM of Coyote and Northwoods Sports Radio in Rhinelander and general sales representative for Results Broadcasting stations in Antigo, Shawano, and Iron Mountain; and, posthumously, 35-year WOBT-AM in Rhinelander air talent John M. Wadd.

The Local Broadcast Legends will be also recognized on June 21 at the WBA Summer Conference.