Among the notable after-hours movers on Wall Street tracked by Seeking Alpha late Thursday was Entercom Communications. As of 5:45pm Eastern, ETM was off 4.9% from where it was at the Closing Bell.

Could a Simply Wall St. assessment of the salary of President/CEO David Field have anything to do with it?

The Wall Street blog enjoys examining the CEO compensation levels of those at companies of similar size.

On Friday, it did so for Field.

How Does David Field’s Compensation Compare With Similar Sized Companies?

According to Simply Wall St. data, Entercom has a market capitalization of $526 million, and pays Field total annual compensation worth $3.5 million.

Still, this factors into Simply Wall St.‘s look at a group of companies with market capitalizations from $200 million to $800 million.

“Thus we can conclude that David Field receives more in total compensation than the median of a group of companies in the same market, and of similar size to Entercom,” Simply Wall St. says.

However, this doesn’t necessarily mean the pay is too high.

“We can get a better idea of how generous the pay is by looking at the performance of the underlying business,” it explains. 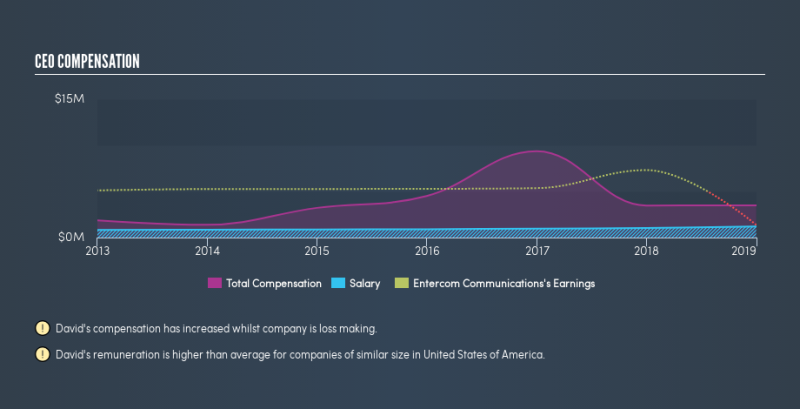 “With a three year total loss of 70%, Entercom Communications Corp. would certainly have some dissatisfied shareholders,” Simply Wall St. concludes. “Shareholders would probably think the company shouldn’t be too generous with CEO compensation.”

Entercom has shrunk its earnings per share by an average of 50% per year (measured with a line of best fit) over the last three years. In the last year, its revenue is up 42%.

“We found that [Entercom] pays well over the median amount paid in the benchmark group,” it said. “The growth in the business has been uninspiring, but the shareholder returns have arguably been worse, over the last three years. Although we’d stop short of calling it inappropriate, we think the CEO compensation is probably more on the generous side of things.”

Adam Jacobson
The week that was wasn’t so kind for Entercom Communications. With a Q2 2019 earnings per share miss of 11 cents, compared to what Wall Street analysts expected, ETM shares plunged by 36% in value. On Monday, a further 6% slump was seen, in response to a big dividend cut.

Entercom Board Declares A Dividend

Adam Jacobson
Can a cash reward of sorts help Entercom Communications in its quest to energize its sagging stock price? The radio broadcasting company’s board of directors on Tuesday approved a sizable cash dividend to shareholders of record as of March 14. Yet, Entercom shares were off 6.9%.