Jed Lewison of DailyKos.com notes that Glenn Beck, while in the headlines almost daily, may not be equating that popularity to ratings anymore:
“Yesterday, for some reason or another, I was curious to see how Glenn Beck had been doing in the ratings department…so I collected the ratings for each and every one of his TV broadcasts since the premiere of his show on Fox in January, 2009.

Next, I calculated the average audience size for each week that the show has been on the air, and put the numbers into a chart. (To be fair and balanced, I excluded the weeks of the Thanksgiving, Christmas, and New Year’s holidays, each of which artificially depressed Beck’s numbers.)

The chart revealed something of a surprise: since Glenn Beck’s ratings peak during the week ending January 22 (the week of Beck’s special “Revolutionary Holocaust: Live free or die” broadcast), Beck’s ratings have been on a steep slide, dropping nearly 50%. 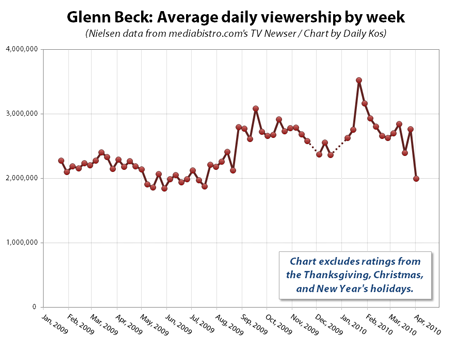 In fact, last week, Beck averaged less than 2 million viewers for the first time since the middle of July. He did take vacation for part of the week, but his ratings were still lower than during previous vacations.

If you factor out his vacation, Beck probably has a solid, dependable audience in the range of 2.6 million. Those numbers are decent, but they hardly represent a meteoric rise from the 2.25 million or so that he averaged in his show’s first few months. He’s managed to deliver some impressive spikes in his audience, but he generally hasn’t held those spikes. To the extent that Beck’s baseline audience has grown, it essentially mirrors Fox’s overall growth. In other words, Beck may not be the ratings machine most think he is.

I’m not saying Beck has peaked. Remember, first and foremost Glenn Beck sees himself as a showman and he’ll stop at nothing to boost ratings.

Beck is a swing-for-the-fences kind of guy, and so far he’s generally connected, delivering impressive short-term spikes in his audience. But just like a product that goes on sale too often, there’s a limit to the number of swings Beck can take before he cheapens the value of his broadcast.

As Beck continues to take big swings, he’s going to end up having more shows like his disastrous Eric Massa interview. As that happens, the audience is going to start seeing Beck as a ratings whore, and that will erode his authenticity — and the trust they have in him.

The catch-22 for Beck is that if he doesn’t continue to take big swings, his audience will grow bored as he says the same thing over and over. So he’s going to need to keep on pushing the envelope — putting his brand at risk while he does it.

Either way, at some point, Glenn Beck’s career will look like that of Morton Downey Jr., who exploded onto the scene in the 1980s, imploding before the decade was out.

I don’t know how close we are to that point. But one day, the moment will come. And when it does come, Beck won’t have peaked — he’ll have crashed. He’s unsustainably foolish, and things that aren’t sustainable just don’t last.