From the content that’s being consumed to the emergence of new distribution outlets and emerging gadgetry, the traditional pattern of media usage and radio listening are changing— in some cases, rapidly.

The survey, conducted between Jan. 16-Feb. 27, 2017, focuses on the media habits of audiences for 14 radio formats, spread across five generations.

“From Boomers to Millennials, different patterns of consumption are emerging, providing radio broadcasters with information from which they can map out game plans and strategies,” Jacobs Media said.

Results of the study will be distributed in piecemeal over the next several months.

Jacobs Media President Fred Jacobs said of the key findings, “We’ve been focused on the car for several years, and for good reason. But, as time goes on, radios are disappearing from the home front and being replaced in many cases by smart TVs, wireless audio systems, and ‘smart speakers’ like Amazon Echo and Google Home. The ‘Alexa Factor’ is a big finding in this year’s study of radio listeners.”

Techsurvey13 provides two different “pyramids” for stakeholder stations. The “Media Pyramid” contains broad categories, including smartphone and tablet ownership, audio and video streaming, and this year, devices like the Amazon Echo. The “Brand Platform Pyramid” unveiled in 2015 continues to provide usage information about big brands that include Snapchat, Netflix, TuneIn, and Shazam.

Jacobs said, “Devices like the Echo and Google Home are in 11% of our respondents’ homes. While smartwatch ownership has doubled from 2016, these devices are still trying to discover their true value proposition. In the meantime, most other categories are showing growth, including podcasting, mobile devices, and audio and video streaming.” 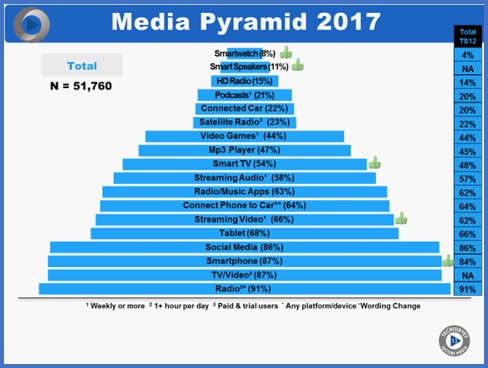 More than nine of 10 respondents spend at least one hour a day with radio and/or television, the foundation of this pyramid.

Among the key findings:

This year’s Brand/Platform Pyramid provides data points that help broadcasters get more granular with their audiences, identifying the key media brands they use.

For each of the brands and platforms, this pyramid shows weekly usage (with the exception of broadcast radio which is one hour/day or more, and SiriusXM which is based on subscribership/free trial). 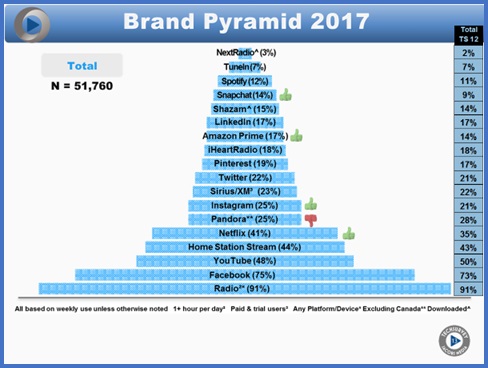 Key highlights from the Brand Platform pyramid include the following takeaways: