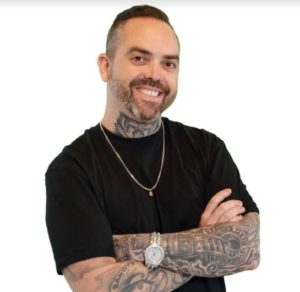 Get ready for one of the biggest morning radio show wars Seattle has perhaps ever seen.

Jubal Fresh, who had been the host of the nationally syndicated “Brooke & Jubal” program before officially exiting the KQMV-FM “Movin’ 92.5” in Seattle-based show in early April, is teaming with his wife for a new wake-up program. It’s set to air on the direct format competitor to “Movin” in the Pacific Northwest’s biggest market.

Where can those in Seattle, Tacoma and those between Centralia and Bellingham tune to when the program debuts?

And, with what is now “Brooke & Jeffrey” receiving decidedly mixed listener reaction and affiliate cancellations since the December 2019 arrival of Jeffrey Dubow, more than a local battle could be at play.

Jubal is one of the most popular air personalities to emerge from Seattle since Bob Rivers first came on the scene. Jubal is a stand-up comedian, and with his former partner at KQMV quickly gained a national audience. Then came an Ottawa affiliate, in August 2018, and by November 2018 some 50+ affiliates had inked “Brooke & Jeffrey.”

Talk of Jubal’s return to multi-market availability is premature, however, and he and wife Alex Fresh will be focused on the Puget Sound region’s listeners, first and foremost, upon their arrival at KBKS — Jubal’s first radio home. He joined Movin’ in 2011, after his stint at “Kiss 106.1.”

It was understood in April that with his exit from “Brooke & Jubal” and KQMV, owned by Hubbard Broadcasting, Jubal and his wife would enter the podcast realm.

Now, the Fresh couple are ramping up additional hosts to join them, once they settle in at KBKS.

“I’m going back to Kiss because when I left 10 years ago, I didn’t get the chance to clean out my desk, and I just want my favorite pen back,” joked Jubal, who added that the “amazing opportunity to work for, and with, the best in the business at iHeartMedia” was likely too hard to pass up. “I’m constantly trying to evolve and grow and find new innovative ways to entertain my audiences and iHeart is always on the cutting edge. This new chapter is going to be bananas. Plus, I get my pen back!”

Robert Dove, Market President for iHeartMedia Seattle, said, “We couldn’t be more excited to partner with Jubal on his next endeavor and welcome him to iHeartMedia Seattle. Jubal’s ability to cultivate a diverse fan base across America, but most importantly, right here in Seattle, was just something we could not miss. I’m excited to welcome him and Alex to the team.”

The EVP of Programming for iHeartMedia in Seattle, who simply goes by “Maynard,” added, “We are just trying to give the people what they want, and they want Jubal!”

The vociferous disappointment of his departure from “Brooke & Jubal” was made known by many RBR+TVBR readers, making our April 2020 story one of the most-read RBR.com stories ever.

In his time at KQMV and with Hubbard, Jubal received an array of awards and accolades celebrating his on-air career, including the National Radio Hall of Fame “One to Watch” Award and the prestigious Marconi Award for “Large Market Personality of the Year.”