Pandora Media may have had a difficult trading session, with a 44-cent slide, to $13.14, on Tuesday, but radio and TV companies largely saw healthy gains out of the Presidents’ Day holiday.

Why the dip for Pandora? The Motley Fool openly asked on Tuesday if the streaming audio company was ready to make a deal — if not with Sirius XM, its longtime suitor, than another player.

Shares fell for Pandora even after BMO Capital analyst Daniel Salmon reiterated a “market perform” rating for the company and upped his target price on “P” to $13.

Michael Kramer of Investopedia has some insight into why investors may have sold off Pandora shares.

“I have always found it hard to value a company like Pandora for various reasons,” he says. “Most importantly, there is no guide as to valuation versus earnings. One could use the price-to-sales ratio approach, but the company is losing money so all the revenue the company is producing is being spent. Typically, when analysts run into these issues they turn to values such as EBITDA, but Pandora has negative EBITDA. In my opinion, this makes it nearly impossible to say where the fair value should be for a company such as Pandora Media.”

Meanwhile, “Looking at some of the other underlying issues at Pandora, the content acquisition cost is rising at a faster pace than the actual revenue, which has also been a key problem for the company,” he says.

While there are positives, such as gains in Advertising Revenue Per Thousand Listening Hours (RPM) and in Advertising Licensing Cost Per Thousand Listener Hours (LPM), Kramer laments, “We don’t have reliable metrics to make a solid conclusion. It would seem I’m not the only one trying to figure these things out either. The market appears to struggle with it every day.”

The top radio sector gainer on Tuesday was iHeartMedia, which climbed 7 cents, to $1.17, ahead of its Q4 and FY2016 earnings release on Wednesday morning. 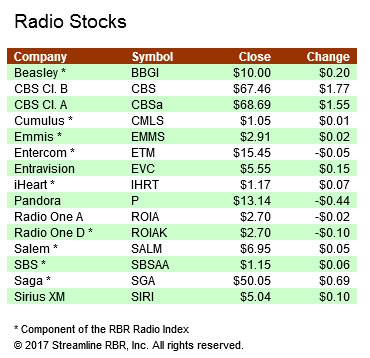