Fresh data from YouGov shows what many might have suspected all along: teens aren’t like their parents.

However, it’s how they’re different in regard to advertising that might prove more surprising, while also revealing key insights for marketers, the research firm’s Paul Hiebert reports.

Unlike American adults aged 18+ who, for the most part, don’t agree that advertising helps them choose what to buy and don’t enjoy watching promotional spots starring their favorite celebrities, the majority of U.S. teenagers aged 13-17 do.

As the chart above illustrates, 58% of American teens agree that advertising helps guide their desires and purchase decisions. Meanwhile, 55% say they enjoy watching ads that feature their favorite celebrities. 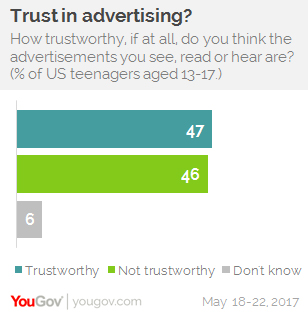 At the same time, results show that teens are split on the question of trust in advertising.

According to a YouGov survey conducted last March, 61% of U.S. adults aged 18+ exposed to advertising at least once per month report that they generally trust the advertisements they see, read, or hear.

This sentiment has changed compared to three years ago, when U.S. adults felt more or less the same as today’s youth.

In March 2014, exactly half of Americans aged 18+ indicated that they trust the ads they see, read, or hear, while the other half said otherwise.